Pearland High School – population 2985 – has been infiltrated by zombies.

But YOU can stop the zombie attack.  The antidote is locked in this box!  You have 30 minutes to decipher the codes and retrieve the antidote.  It’s as simple as moving left, down, up, right!  Can you break out in time to stop the zombies from taking over Pearland High School?

I placed all three locks (directional, 4-digit, and 4-letter lock) on a hasp attached to one box.  I projected and read the story to the class and asked each group to get an envelope with the clues from me. 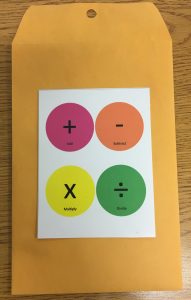 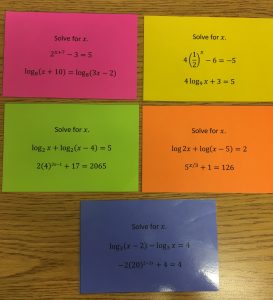 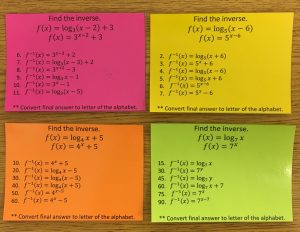 Several of the groups placed the envelope on an empty desk or up-side-down, so they did not notice the color clue that told them what to do with the solutions to the solving equations clues and inverses clues.  As a hint for groups that requested one, I indicated that they needed to pay attention to the paper on the front of the envelope.

Groups had 30 minutes to solve the clues to breakout and not become a Zombie.

In my classes, 13 out of 22 groups became “Zombies.”  However, with an additional 15 minutes, only 2 group were unable to successfully breakout.

In the other teachers classes, 1 group became “Zombies.”

I believe the reason my students were less “successful” was because they did not know what to do with all the clues.  Each group “divided and conquered” to solve the exponential and logarithmic equations and find the inverses, but they did not understand which cards went with each lock.  I watched multiple groups switch cards with their teammates to have them check their work, so they had the right answers.

In the other teacher’s class, the students were presented with one set of clues at a time.  Once they had figured out what to do for the 4-digit lock, they were able to transfer that knowledge to decode the clues for the 4-letter lock.