In March, I will be presenting “Breakout EDU with the TI-Nspire” at the Texas Instruments International Conference in Chicago, IL.

Breakout EDU brings the escape room experience to the classroom by creating ultra-engaging learning games for people of all ages. Games (Breakouts) teach teamwork, problem solving, critical thinking, and troubleshooting by presenting participants with challenges that ignite their natural drive to problem-solve. Participants will use the features of the TI-Nspire, including geometry tools, regressions, matrices, and sliders, to complete a series of challenges, reveal clues, and unlock mysteries in order to win the game. This session will begin with a short introduction, followed by playing the game, and will conclude with a short discussion about the game and how the activity can be used.

I had my department test out my game at our department meeting today.  Two of three groups were able to breakout. 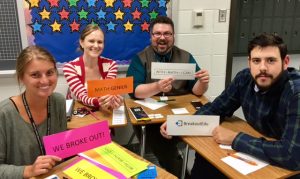 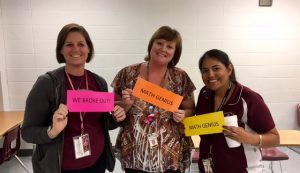 The group that did not breakout gave me some feedback regarding their troubles.  I made a few changes to my presentation and clues that will hopefully allow all groups that participate in my session to successfully breakout.

I began with a broad overview of the layout of the handheld.  Then I showed them an action-consequence document that I had downloaded from Science Nspired.  Next, we used the CBR2 to practice matching some graphs using the built in DataQuest app.  I purposely planned this activity knowing that the physics teachers have motion detectors and have their students do the graph match activity using the Vernier LabQuest.  Finally, we explored the Science Nspired website.

The feedback from the physics teachers was positive.  Although they do not have constant access to TI-Nspires in their classrooms, they walked away feeling more comfortable with helping their students that do have them and allowing those students to use them on tests.

I also learned something from the physics teachers.  In physics, the scales on the axes are often different.  They told me that students are trying to find slope of a line by counting grid lines between points, not recognizing that the horizontal and vertical units of the grid lines are not the same.  I am going to suggest to the math teachers that we begin giving students linear graphs where the axes do not have the same scale and ask the students to find the slope of the line.  Our students will benefit from some graphical literacy.

Over the summer I was working on curriculum for a new course, Algebraic Reasoning, that I am teaching a section of this year.  I knew that I wanted to do lots of activities with these students, who typically struggle with math.  I came across an activity that mentioned the game Hedbanz.  Unfortunately, I don’t remember where I saw the activity, so I don’t know who to give credit to.

I have never played the game Hedbanz, but the general gist is that you put a card in a headband and must ask yes/no questions to figure out what is on your card.

After graphing transformations of linear, absolute value, and quadratic functions, I gave a quiz on transformations.  The quizzes were terrible.  I had to rethink how I would use the planned activity.

The activity worked wonderfully.  My inclusion teacher and I were able to spot check pairs of students to make sure that the students were correctly identifying a, b, h, and k for their partner.

At the end of class, I gave a requiz on transformations.  They were so much better.  This activity is definitely a keeper.  In addition, I may use the activity next year in my Algebra 2 class, as I had originally planned.